Summers are hot here. Have I mentioned that? Hot. I’m not a big fan of the heat. My husband and I are from Connecticut and he’s not a fan of the extreme cold and that’s why we moved south. I would probably have been happier in New Hampshire. Except for the snow. Maybe I just should have bought a motor home instead of a mobile home, that way I could just follow 70 degree weather year round or something. I don’t know. But summers here are hot.

Trailers are ovens in the summer without air conditioning. They’re metal boxes. Most of the trailers I clean out or paint don’t have the power on, so I’m pretty much out of luck. In the summer – and when I say summer I mean any time between March and October – I try to start my days at first light and finish before noon if I can make it that long. If the water is still on, sometimes I just stick my whole head in the shower in order to… you know… not die. In the winter, I’ve found, things don’t smell as bad.

This past summer this kid (he was probably 19 or 20, obviously too young for any kind of responsibility, though I recall being on my own at that age) decided he didn’t need to pay rent anymore and eventually got evicted. After the court date, but before the lockout date he decided to have some friends over for a little going away party.

I remember the first place I had on my own, without roommates when I was about that age. It was a basement apartment in a place called Westport, CT. The apartment was huge, running the whole length and width of the enormous home it was under. There was a marina at one end of the street where people moored their sailboats and their yachts. I could smell the salt water in the air and hear the clanging of the buoys at night. I was so proud of my apartment. I didn’t have fancy furniture but it was all clean and taken care of. I swept. I mopped. I vacuumed. I dusted. I scrubbed my shower. Someone else was allowing me to live in a property that they owned and I needed to take care of it. I had a roof over my head and I was happy. My priorities were; Rent…. and then everything else. I made friends take their shoes off when they came in!

And it wasn’t just me! My friends were clean, too!

Clean clothes belonged in the closet or dresser.

Books belonged on the bookshelf.

Eggs belonged in the refrigerator. Not on the walls. In the summer. Summers are hot here. Did I mention that? 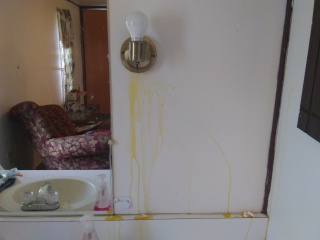 Trash belonged in a bag in a trash can outside.

Dirty dishes… didn’t belong anywhere, they were washed and put away. 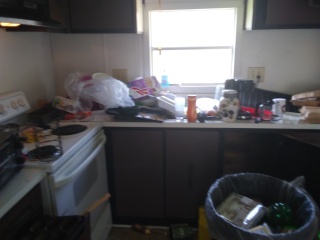 And there were always plenty of places for friends to sit and get comfortable.

I don’t know, maybe I’m just getting old, and cranky, but I never thought simple rules of Indoor Living would ever have to be written out!

Sure! I’d be happy to do some cleaning! Happy!

My Books on Amazon